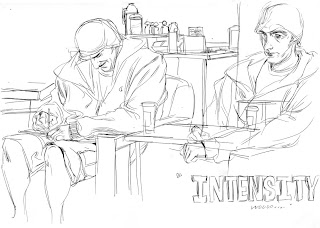 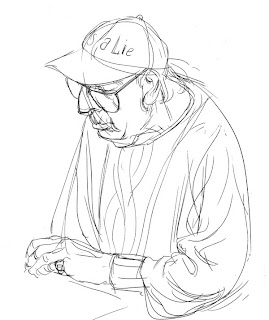 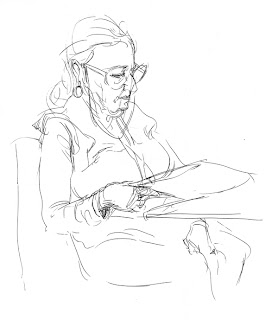 So since I don't normally post personal work (read: lazyness) Here are some recent sketches... and an update on some of the projects I've been on.

If you look around real hard, you can find some beautiful Frankenweenie artwork Dennis Greco, a coworker of mine, did while we were on the project! It kind of gives you a general feeling of the movie. For now the film is slated for 2012, and hopefully I can get clearance to post some stuff after its released.

Some production images came up on Del Toro's production Pinocchio as well, I worked only very briefly for a couple of months on the pitch for the stop motion animation as a painter. It was a very collaborative process, where I did a few paintings in tandem with several other artists who were responsible for layout and character design, etc. Check it out here (I only did finishing paint on the very last image shown, so I am not responsible for the maquette awesomeness nor any part of the first image):

Cool stuff! Whoever that guy is, he looks pretty freaking intense.

Probably don't remember me from PK but I am so glad to have found your work again. loved it then and now. keep up the great work

Really nice stuff!
Hey can I get some advice?....

I'm going to AAU this Fall (*hopefully*) and I was wondering how you honestly felt it worked for you? Did you have an amazing time, and learned a ton, or was it mediocre, or was it horrible and you're glad you're out of there? Or a mixture of all of the above?
Just looking for honest feedback so I can judge what I'm getting into. Thanks! Love your stuff, by the way!!!

Your work is fantastic!

The Art of Kevin Wueste said...