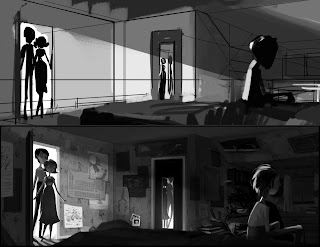 I posted this image on my tumblr with a pretty big chunk of words, and I thought it may be worth posting here too.

There is SOOOOO much wrong with this painting. But in the interest of full disclosure, I put it up. it just shows how much I’ve struggled with constructing space. Most of my paintings started off like the image on top, where I really had to fight to figure out what was going on.

Nowadays, I would have approached this image very differently, but the experience was invaluable. There was no way I was going to let on that they may have made a mistake hiring me, so I had to learn quickly. Anyway, I’ve kept a lot of my “graphs” just so I remember that I’m probably never going to get a task that’s easy, and so now whenever I get an assignment I try to not be scared and just attack it. It doesn’t work out all the time, but I end up learning a lot!
Posted by Helen Chen at 9:51 AM 8 comments:

Hey guys! Thought I'd post a look at what a frame of Paperman looked like before it was painted and dressed. We would get a scene with proxy geometry like the one on the top of the frame, and from there I would deconstruct the perspective and repaint the scene, so that it could be reprojected onto the simple geometry for the final shot (to support stereo). 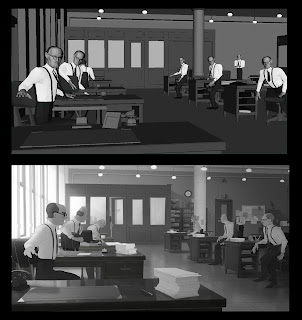 Paperman is unique in that most of the lighting was placed in the hands of the artist painting that shot, as a result, EVERY shot is individually designed. Some were easy since the crazy awesome Jeff Turley would have a key, others we'd just kind of go with it. Personally, I loved this approach because it gave me a chance to explore lighting scenarios appropriate for the scene and a little for my own satisfaction. I prefer black and white work since color is not my strong suit, so this was a lot of fun for me.

We also tried to paint characters in all our scenes, because that would serve as a value guide for the final frame.
Posted by Helen Chen at 12:16 PM 8 comments: I got a tumblr! I haven't quite gotten the hang of it, but at least it isn't empty. Take a look!

This was an early painting of the kart bakery.

A piece I did when I was in training and just started on Paperman. 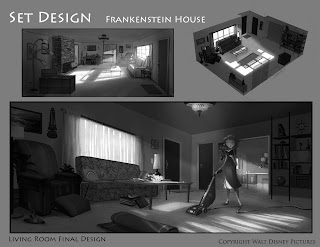 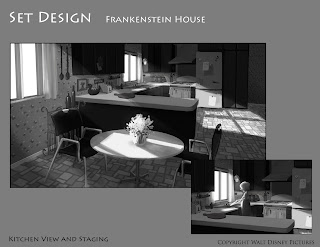 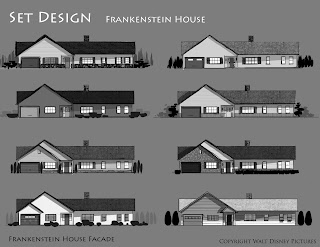 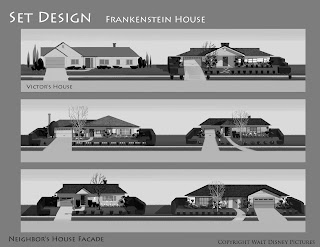 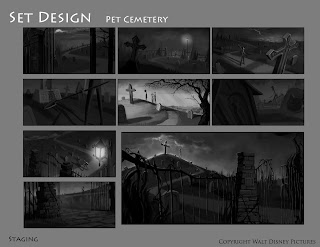 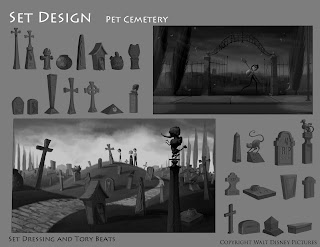 By now, this art is 2-3 years old, so... Yeah. Frankenweenie was the first animated film project to hire me as a visual development artist, and looking back on my (shitty) portfolio, its a miracle they had that much faith in me to begin with, thank you Andy Nicholson and Troy Nethercott!

A little side note: I was LITERALLY hired at CTN expo, which is right around the corner, so all you art students take heed!

The team was small but tight knit, led by crazy awesome Production Designer Rick Heinrichs (who at the time was also designing Captain America... no big deal) and art director Andy Nicholson. We had a 9 member team stationed at Culver Studios where Tim Burton was finishing up Alice, and for 4 months we hunkered down and tried to figure out what New Holland would be like. I learned so much on the project, and really got a sense of what it was that I wanted to do with my art. More importantly, it introduced me to some of the best people I know, and the chance to work with each one of them again.

I got pretty lucky in the sense that since I mostly focused on the Frankenstein house set and the cemetery set, and a little bit of the neighborhood, they didn't get cut from the final film. You know, because Victor needs a place to live, and Sparky needed to die.

Blargh, enough sentimental chit chat, tl:dr, here's some art! This is all copyright Walt Disney Pictures, I don't own anything! Please go watch the film! 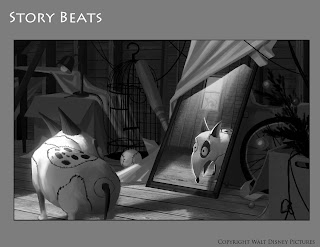 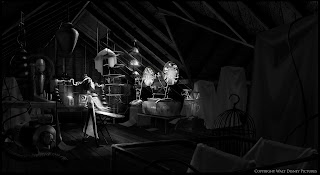 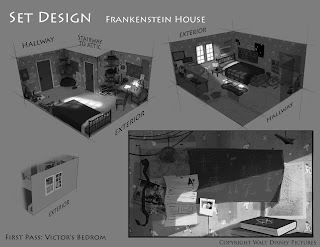 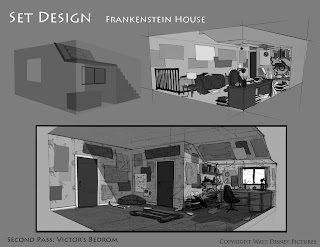 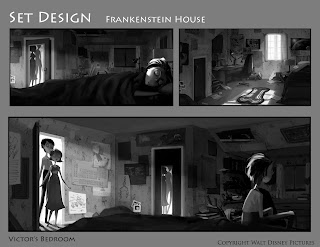 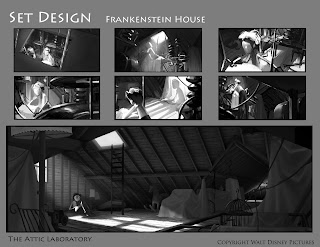 
I hope you guys enjoyed Ralph opening weekend! I worked on Ralph first as a visual development artist and then a Matte Painter, so here's some stuff. 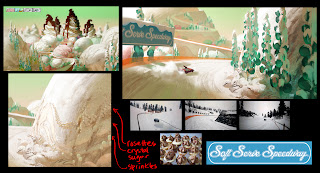 Matte Painting the image below was a huge challenge. Not only does it take up the entire screen, the painting had to hold up in stereo and as a 2d background that felt like it was created and rendered in pure cgi. I also had to paint two versions; a destroyed version of Sugar Rush and a pristine version.

And my favorite piece of unused graffiti in game central station. 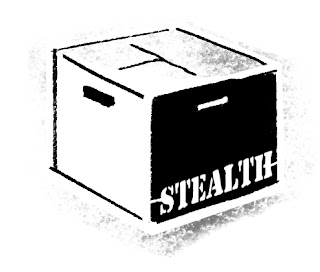 Here's a post in celebration of the release of Wreck it Ralph and Paperman!

When I first "graduated" from trainee status, it was the production Paperman who gave me my first shot to prove myself at Disney! I firmly believe that without this very special project, my time at Disney would have been cut short. Thanks so much to Jeff Turley and John Kahrs for giving me a chance. The images below are the very few vis dev pieces I did, because it was time to ramp up and work on the backgrounds for the final product. 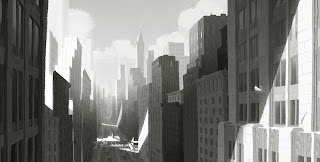 Will be released TONIGHT at midnight in front of Wreck-it Ralph.

This became the official matte painting crew t-shirt mascots for Wreck it Ralph! 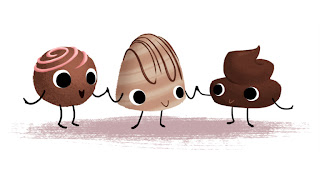 Another moment painting that was released, with Ralph feeling sad and neglected.

Pre-order the Ralph Art of book from Amazon. I have a few pieces in there along with a TON of artwork from all the other amazing artists who worked hard on this project!

And just a little something extra, the 8bit Ralph crew shirt I did for the Lighting crew.

This new image was released today as a part of a Sugar Rush special here. 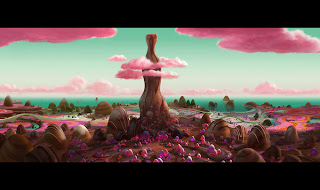 Wreck it Ralph and Thugaledon

Here's a concept art piece I did from the upcoming film I've been working on at Disney Animation! Everyone is super excited about this next one, and it has challenged me as an artist for almost a year now. This is one of the first paintings I did for the film, and looking back there's SO MUCH I would change. The colors are a bit funky. I was tasked with creating a painting that would bring some of the really whimsical designs of Mac George and Lorelay Bove to 3d space.

And a thugaledon. For all your thug needs. 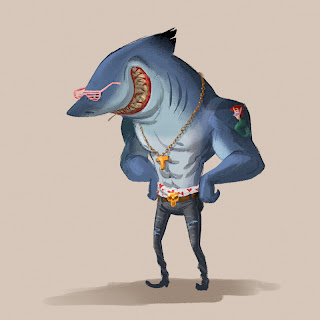 Following the recent debut of the Frankenweenie exhibit in San Diego, here's a poster I did for the Frankenweenie Annecy crew two years ago. Also, a weird little vis dev painting (actually more of a thumbnail) I did that was floating around the interwebs. 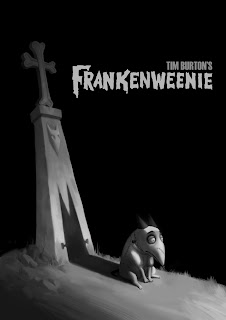 Went to same place as last week to paint!

And Topanga Canyon on July 4th!


So after a few weeks of stubbornly using pen and paper, I finally broke down and decided to give digital plein air painting a shot. This was done in an area found by my friend Rustam, and we went painting there last weekend.

I painted through the computer's battery life, so something like 1 hour 45 minutes??

These paintings are from when I was still a Trainee in Disney's Talent Development Program! Not related to production, and as assignments from my mentors, Kevin Nelson and Paul Felix.

*Edit* So to answer some questions, these paintings came from various exercises and assignments my mentors gave me. The trains were to train me in perspective and draftsmanship. The Fox was to to kind of tackle painting, color, and story. I don't think I particularily aced any part of those assignments, but just doing them helps a lot. 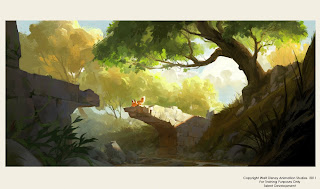 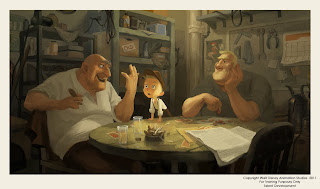 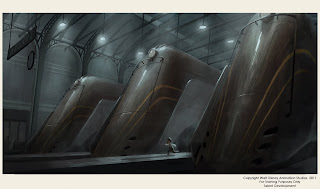 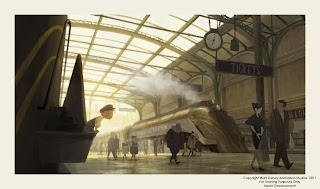